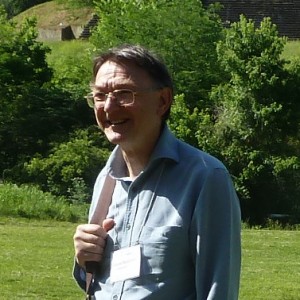 studied Fine Art at Camberwell School of Arts and Crafts (1968-72) Dip AD (1972) and at Brighton Polytechnic (ATC 1974). Half French on his mothers side , he comes from a family of painters and sculptors (Geoffroy-Dechaume) and on his fathers side there is also a background of writers and artists – many of them associated with the Bloomsbury group.

From 1974-76 he taught Art at Didcot Girls Comprehensive and held his first one-man exhibition at The Borlase Gallery, Blewbury in 1978. In 1983 he was awarded a Major Bursary by the Southern Arts Association which enabled him to give up part-time work as an auxiliary nurse. In 1986 he moved to the village of Kingsland in Herefordshire with his wife and two children. He has exhibited widely in England, as well as in France and in America. Locally he has exhibited in Hereford, Ludlow, Leominster and in St Michael’s Church, Discoed where he has helped to organize a series of Lent exhibitions. He shows regularly with Piers Feetham Gallery, in London, the Silk Top Hat Gallery in Ludlow, and with Monnow Valley Arts (Wolseley Fine Art).